Weetabix gives rewards to retailers in 2018

The promotion runs until the end of February, supported by trade advertising
and a PR campaign, with high-impact PoS materials to promote the competition in depot. 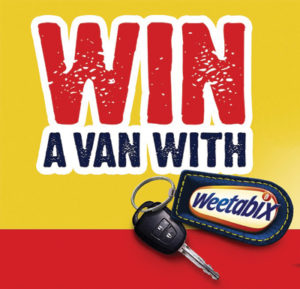 The competition is run via a ‘text to win’ mechanic. Retailers will need to purchase three cases of Weetabix cereal then text their details to a dedicated competition hotline. Twenty runners-up will each receive £100 worth of Weetabix cereal products. Further details of the promotion can be found at www.prizeology.com/weetabix.

Darryl Burgess, head of convenience, wholesale & foodservice at Weetabix,
says: “2017 was a hugely successful year for us and we have ambitious plans to maintain the momentum this year. Kick starting 2018 with this major promotion demonstrates our continued support for convenience stores.”

The supplier has also launched a consumer on-pack promotion to encourage a healthy 2018, running through to 28 March. Shoppers will be able to enter codes found on 48 and 72 packs onto a Weetabix website to receive 10 coupons offering £5 off fruit with selected supermarkets and retailers. In addition, a prize draw to win £500 towards a healthy lifestyle will be open from 29 March to 30 June.