Halewood has unveiled a new social media campaign for Vestal Vodka that pokes fun at what it calls its ‘noisy neighbours’ in the category. 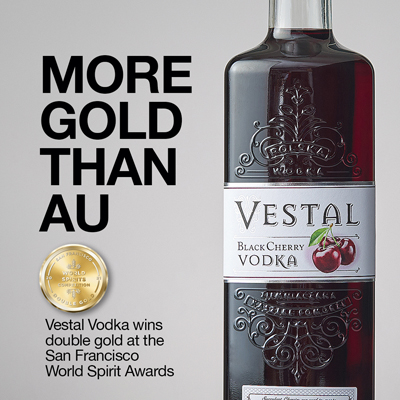 The campaign has been launched off the back of Vestal Vodka’s success at the San Francisco World Spirits Competition (SFWSC), where the brand scooped two golds – one for its 2015 vintage, the other for its black cherry flavoured variant. The accolades follow the 2015 vintage being awarded 99/100 at last year’s International Wine & Spirit Competition (IWSC).

In the new campaign, four ads are being placed across all major social channels, including Instagram, Twitter, Facebook and LinkedIn. Each pokes fun at brands that Vestal founder William Borrell claims “do an awful lot of shouting”, but which didn’t win any golds at the SFWSC.

The executions read: ‘Sorry Ciroc, We Rock’, ‘We Cooked The Goose’, ‘Flying Higher Than Skyy’, and ‘More Gold Than Au’.

Borrell said: “Vestal was the original terroir-led vodka – no one can dispute that – but we’ve always been quite modest in our brand marketing. Winning these two medals though, especially post that IWSC score, has emboldened us. We’ve now got a cracking line-up across different vodka categories and it just feels right to shout about them – albeit in a gently humorous way that contrasts with some of the more OTT brand work out there!”