AG Barr was the runaway victor of the highly-coveted supplier awards at Scottish Wholesale Achievers 2020. 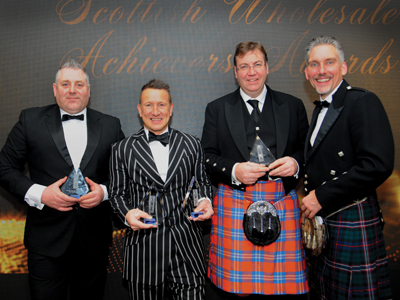 This is becoming a bit of a habit: AG Barr has triumphed once again at the Scottish Wholesale Achievers awards, this time claiming an unprecedented four of the five supplier awards up for grabs.

The supplier won the very competitive Best Overall Service award, as well as Project Scotland, Best Advertising Campaign (for Irn-Bru ‘Get Some Irn In You’) and Supplier Sales Executive of the Year (Steven McGarry). If that weren’t enough, AG Barr was also runner-up in the Best Foodservice Supplier category. The company’s sweeping success this year builds on its repeated wins of the Best Overall Service category.

This accolade has been industriously earned through increased performance standards, as commercial director Jonathan Kemp explains: “The first year I attended the awards, which was 2004, AG Barr was in the bottom five of the 25 suppliers contesting Best Overall Service.

“The following year we made it into the top 10, then we worked our way up. I’m sure people say ‘Barr’s always win it’, but actually that’s not the history.

“The team put a lot of effort into managing our customers – they take a huge amount of pride in doing that well. Achievers is about recognition, and because it comes from our customers it is so much more valued.”

Kemp adds: “Winning comes down to the people. People do business with people, particularly in Scotland and particularly in wholesale. You have to invest in good quality people, you have to keep them in their roles for a decent period of time – not see wholesale as a stepping stone – and you have to have people who passionately care.”

Evidence of this is AG Barr’s score for Best Overall Service – 43.85 out of 50, which compares to the runner-up JTI’s still very respectable 41.63. “If I had to pick the award that means the most, it would be Best Overall Service,” says Kemp. “The judging is so robust.”

Wholesalers vote on set criteria every month over four months and the spreadsheet is sent to the suppliers in contention so that they can act on the results.

Business unit director Ian Johnstone comments: “The Achievers awards are very fiercely contested and highly prized because they are about customers giving you feedback, particularly Best Overall Service. It is a very thorough process. Even if you aren’t winning, you can get a huge amount of benefit from it.”

Similarly, Project Scotland involves wholesalers evaluating suppliers’ efforts to build business with the trade. This year, AG Barr’s launch of Irn-Bru Energy took the crown. Thanks to heavyweight but carefully targeted wholesaler, retailer and consumer activity – as well as the correct pack formats and price points – this initiative generated sales of three million cans within the first four months of launch, with 26% of Irn-Bru Energy shoppers new to the category.

As David Lamb, trading director of CJ Lang, commented, “AG Barr has set the benchmark for all suppliers when launching innovation into the market”.

The judges were similarly glowing about Steven McGarry winning Supplier Sales Executive of the Year, describing him as “an old dog who has learnt some new tricks” in recognition of his hard work in understanding how his customers are using digital and social media and adapting his own approach to be more in tune with their needs.

“I am delighted for Steve McGarry,” says Johnstone, “and I am also thrilled for Craig Barr because coming runner-up in the Best Foodservice Supplier category does him a lot of credit. We used to be nowhere in foodservice, but we put a lot of resource into it, so to be runner-up is a massive step forward for the business.”

Can AG Barr win five out of five supplier awards next year? “It will be tough,” says Johnstone, “because companies like Unilever Food Solutions, which won this year, are specialists. But we have the determination and we have the people. We also know we’re only as good as our last game so our team will get back on it and do their best to exceed our customers’ expectations in every way.”