Work has been completed at Parfetts’ Merseyside cash & carries at Aintree and Anfield to improve not only the exterior signage, canopies and roof, but also the reception areas.

There has also been investment in new technology to support ‘partnership deals’ with a host of leading suppliers.

All six branches (including Stockport, Sheffield, Halifax and Somercotes) will also have an office staffed by two business development managers, whose main task is to develop the company’s Go Local and Go Local Extra retail initiatives.

Bestway Group’s Best-one chain is offering retailers and consumers the chance to win prizes in a support package for the World Cup in Brazil.

For shoppers, there is the ‘Predict the England Score’ competition, where they have to forecast the results of England’s first-round games. Prizes include personalised England shirts, Xbox 360s, Steven Gerrard designed football boots and £50 worth of sports kit vouchers. 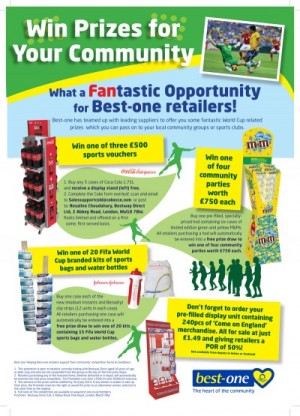 The chain has also teamed up with suppliers so that retailers can win prizes too. By purchasing featured products from Coca-Cola Enterprises, Johnson & Johnson, Mars, Molson Coors and Lucozade Ribena Suntory, shopkeepers can claim £500 worth of sports vouchers, World Cup branded sports bags and water bottle sets, as well as a community party worth £750 which they can pass on to their local school or sports club.

James Hall, director of symbol at Bestway, said: “Best-one is all about retailers being at the heart of the community, so what better way to reward shoppers than by offering them the chance to win at the biggest event of the summer?

“Community is vital. That’s why we also wanted to offer prizes that were community focused. We’re also offering consumers great deals on licensed and ‘big night-in’ products such as 15-packs of lager for only £9.99, multipacks of crisps for £1, £1.79 price-marked Pringles at £1.25 and some really great discounts on wine.”

Palmer and Harvey, the UK’s largest delivered wholesaler, honoured 1,600 retailers and suppliers at its annual Pro-retail 2014 gala dinner and awards evening in Shropshire.

The Wrigley Co was named Palmer and Harvey Supplier of the Year after delivering “an aggressive and proactive above-the-line support programme backed up by unsurpassed inbound service levels,” according to the wholesaler’s managing director Martyn Ward.

Cadbury’s Marvellous Creations range by Mondelez was named Product of the Year, following 104,000 sales of Jelly Popping Candy cases in just nine months, and Republic Technologies was awarded the Service Level Excellence trophy after achieving a service level of 99.7% in 2013. Kellogg’s was named Grocery & Non Food Supplier of the Year after recording sales growth of over 25% in P&H Direct and P&H Independents.

Ward said: “The Pro-retail supplier awards are all about celebrating the achievements of the UK’s top suppliers and how they have supported their products in the independent channel. Choosing the winners was difficult because the standard of our suppliers is so high, but those who have walked away with the awards are the companies that have truly excelled in the past year.” 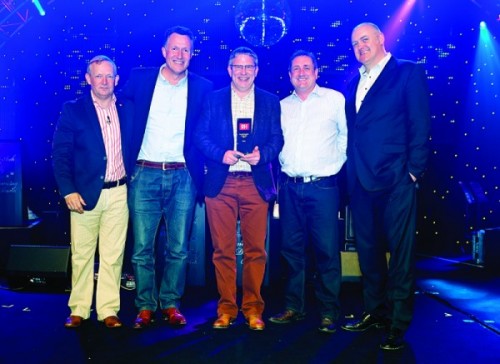 AF Blakemore is helping businesses in Walsall in the West Midlands recycle their waste.

The SPAR wholesaler is offering a free service to aid companies located on business parks with their cardboard and plastic disposals. The company’s logistics offshoot makes weekly collections and the recycling takes place at a purpose-built centre at the headquarters in Willenhall.

Recycling manager Steve Morgan said that when the service opened up to external businesses 18 months ago, six signed up; now there are 23 on the books.