Caterway UK, a member of Landmark Wholesale, is in the process of selling its Leeds depot and integrating business from that branch into its main Nottingham site.

Managing director Rob Atkinson (pictured below with his father, Roy), said: “Leeds has been operating for some years as a dual-purpose depot. We decided that we could not do both delivered and cash & carry well and that the best avenue for us was delivered-only. We did not see ourselves as C&C experts. 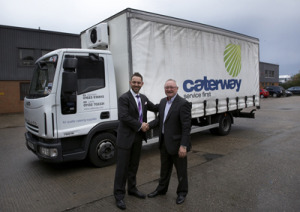 “The Nottingham site will now include a trade counter with a click & collect service. Funds from the Leeds sale will be injected into the main operation.”

The company has a fleet of 18 vehicles that deliver up to North Yorkshire and south to Northampton – a throwback to the time when the business also had a delivered unit in Leicester, which was closed 10 years ago.

“We expect to hit sales of around £7 million in the year to April,” said Atkinson.

Caterway also has two delivered depots in Spain (Alicante and Malaga). “They were opened by us,” said Atkinson, “because we already had wholesale customers in that country selling to the likes of cafés and fish & chip shops run by ex-pats.”

A former lawyer, he and his father Ray bought the Caterway business – established in 1937 – eight years ago.

Rob Atkinson has also just been appointed to the Landmark Wholesale board, along with Sony Bihal, managing director of Time Cash & Carry in Barking, Essex.

A new registration scheme for alcohol wholesalers could be a ‘massive boost’ for legitimate traders and taxpayers, according to the Federation of Wholesale Distributors.

The Alcohol Wholesaler Registration Scheme, which will be included in the Finance Bill 2015, is intended to stamp out duty evasion on beers, wines & spirits, which costs the Treasury £1.3 billion n a year in lost revenue.

Originally proposed by the FWD, the scheme will require any business trading in alcohol in wholesale volumes to undergo stringent tests to ensure they are operating within the law.

Licensed retailers will also be required to demonstrate that their alcohol products are sourced from registered wholesalers.

“We have worked hard to bring this issue to the Government’s attention, and although compliance with the scheme will place an operational burden on our members, it really is a short-term pain for a long-term gain.”

C&C/wholesalers will be required to register during a three-month application window from 1 October to 31 December, or face a penalty. HM Revenue & Customs will then undertake a programme of pre-approval visits from January 2016, lasting approximately 15 months. During that time, it will remove the right to trade in alcohol from any trader failing the AWRS ‘Fit and Proper’ criteria.

From April 2017, C&C/wholesalers will be required to display a unique reference number on all invoices involving alcohol, and to provide it upon request to anyone purchasing from them.

Retailers will be expected, through an online registry, to make regular checks to ensure a C&C/wholesaler’s fit and proper status has not changed.

Landmark Wholesale’s ‘biggest ever £1 promotion’ in January features more than 100 products. And Bestway Group is running a January deal offering up to 80% profit on return on more than 300 Best-in lines.

Dubbed ‘All You Need for a £1 Attack’, the activity is the first of several category and own-brand promotions planned for this year. There is a £30 cash-back incentive for Lifestyle Express retailers.

“We want to help independent retailers fight back against the discounters and supermarkets,” said Chris Doyle, business development director.

The Best-in ‘Family Fortune’ promotion includes impulse, grocery and non-food products. The label, which has been undergoing a rebadging process over the past 12 months, now has over 95% of its range in the new livery, including dual price marking and traffic light nutritional information.

Category manager for own-label Nick Brown said: “Our research has identified that the key target audience for Best-in is mums shopping locally for their families. Everyday essentials make up the majority of the family of products, and these are the ones that are included in our January promotion.

“Family Fortune is the first of a series of own-label activities planned for 2015, including taking Best-in into new product areas and exciting competitions and promotions for customers.”

Evolution within the wholesale sector will be the theme of the Scottish Wholesale Association’s annual conference at Crieff Hydro in Perthshire from 12-14 June. 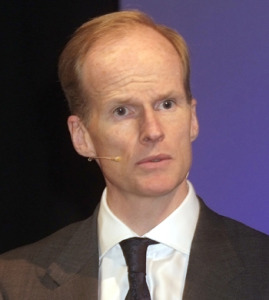 Booker’s Charles Wilson will be one of the speakers at the SWA conference.

The SWA explained that, with wholesalers building on the opportunities presented in 2014 by the Commonwealth Games, Ryder Cup and Homecoming Scotland, the ‘Evolution’ theme will provide a platform for highlighting recent innovations within the sector – from both a wholesaler’s and supplier’s perspective.

The event will also facilitate wider discussion among wholesalers and suppliers on how they can collaborate to evolve their businesses.

The line-up also includes Ryan James, chairman of Glasgow Restaurant Association and owner of three restaurants under the Two Fat Ladies brand, and former Nisa retailer Anx Patel of GoKart, which has developed an app that allows retailers to order directly from suppliers and wholesalers via a tablet or smartphone.

Asim Sarwar, SWA president and managing director of United Wholesale (Scotland), said: “While we are still building our 2015 conference programme, it is gratifying to be in a position to confirm at this stage that we have secured the services of such top-flight speakers.”