Working in conjunction with i-movo, the market leader in digital vouchers, ‘Shop & Win’ is the highest value mobile coupon giveaway that i-movo has organised with a convenience retailer. 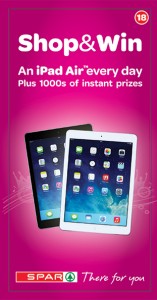 The campaign offers consumers a chance to win an Ipad Air – the top daily prize – as well as hundreds of instantly redeemable prizes in-store, via partnerships with brands including Cadbury, McVitie’s, Coca-Cola, Mars and Walkers.

SPAR UK’s marketing manager, Andy Burt, says: “The deployment of mobile vouchers enables us to ensure that we have a secure method of rewarding our customers.

“Real-time reporting also allows us to manage the performance during the campaign and provide us with the ability to react quickly to changing market conditions. We are confident that the drive will increase footfall into our stores over the coming weeks.”

The promotion, which is co-ordinated by Blue Chip and runs across more than 1,900 SPAR UK stores, is supported by TV and radio advertising, social media and website activity and extensive point of sale.

Speaking on behalf of Imperial Tobacco, head of UK corporate and legal affairs Colin Wragg points to recent studies which show that “regardless of their age, people don’t start smoking because they like the look of a cigarette pack”. 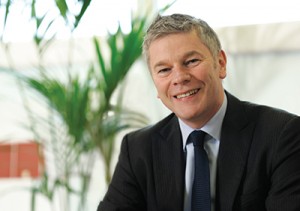 Wragg (pictured right) said: “Our message to the Government is clear – plain packaging is illegal, unnecessary and will be damaging for UK business.

“We will continue to press the Government to apply a common sense approach on this issue, along with those stakeholders who have already made their feelings on plain packaging known.”

Wragg’s concerns correspond with “ineffective and counterproductive” results experienced in Australia, with illicit trade rising by 20% and underage smoking figures remaining unaffected since the initiative was introduced in December 2012.

Sixty Confex members and suppliers were rewarded for achieving growth in Spring 2014 over the previous year’s trade with a visit to Goodwood Hotel and racetrack last month.

The two-day ‘Member Incentive’ event featured a speed dating session between the attending suppliers and members, before guests were treated to a helicopter ride, go-karting and blind-folded mad moke driving. 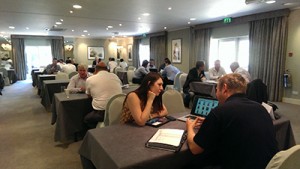 Shyam Lakhani, owner of Millennium Group, commented: “The speed dating format gave us the opportunity to speak with the Confex National Account Managers who are usually ‘one up the ladder’ from our day to day contact.