Enfield-based JJ Food Service has been ranked 167th in The Sunday Times Top Track 250, up two places on last year.

The Top Track 250 list, which is distributed annually, ranks Britain’s top mid-market private companies by their turnover over the previous year.

JJ managing director Mustafa Kiamil said: “We are delighted to be included in this year’s Top Track 250 list, which has collectively contributed 4.3% to the UK’s economy.”

JJ is joined on the list by Elbrook Cash & Carry (249), which also features ninth in the Sunday Times International Track 200.

Matthew Clark has seen a sharp uplift in sales of British beers, wines and spirits over the last 12 months.

The wholesaler’s sales of English wines rose by 53% (MAT Sept 14) following a distribution agreement with Kent producer Chapel Down. This growth has been fuelled by fine dining, prestige and boutique hotels, and quality food-led establishments.

Beers and spirits from the UK have also experienced growth, with sales up by 13% year on year.

Earlier this year Matthew Clark unveiled its extended Boutique Beers range of high quality and distinctive beers, introduced in response to the growth in craft beer in the on-trade. A number of British beers, including Meantime and Curious, have been driving the demand for locally-produced drinks, with sales up by 168% and 1173% respectively.

This trend is echoed in homegrown spirits such as Chase Potato Vodka, which has seen sales increase by 77%, and Sipsmith Sipping and London Dry Gin – up by 254% collectively. Reflecting trends seen in the wine category, much of the growth in these premium British products is driven by quality food-led establishments.

Matthew Clark’s commercial director Ian Smith commented: “We see locally produced beers, wines, and spirits as a key trend to watch. For several years, locally-sourced food has been firmly in the spotlight, and we are seeing this trend growing in drinks as well.”

In a separate development, the wholesaler has bolstered its Wines of Distinction portfolio with a range from Austrian producer Willi Opitz.

The deal gives Matthew Clark UK exclusivity in both the on and off-trade for eight wines (one white, one red and six dessert wines).

Central Foods has extended its distribution of frozen foods across the UK wholesale and catering channel by teaming up with pie and pastry manufacturer Holland’s.

The frozen food specialist, which offers a one-stop-shop exclusively to the foodservice sector, will supply a range Holland’s unbaked pies, pasties and savoury puddings to over 210 independent wholesalers, large-end user caterers and national and regional wholesalers. 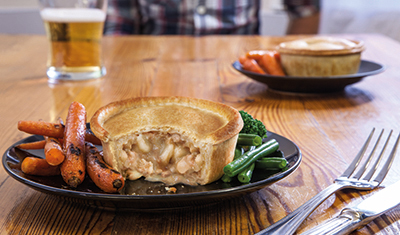 Central Foods managing director Gordon Lauder commented: “Holland’s is an ideal partner for us to work with, being quality leaders in their sector with the same values as ourselves. It’s our job to ensure such tasty, versatile, year-round products get even wider distribution amongst the rest of the foodservice sector – something our track record proves we can achieve.”

David Girdler, spokesperson for Holland’s, added: “We want to increase Holland’s depth of distribution within the foodservice sector and we feel that Central Foods is ideal for this, as they offer more routes to market than any other supplier in this sector.”