The new Peach & Mango flavour, which will benefit from in-store activation from June, is “intended to add interest and increase variety within the kids soft drinks segment”, according to Helen Gorman, kids and family brand director at Britvic.

The new flavour, which has an rsp of 85p for the single serve, £1.99 for the four-pack and £3.25 for the eight-pack, joins existing Fruit Shoot styles, including Orange, Apple & Blackcurrant, Summer Fruits, Apple and Tropical.

Created in collaboration with The Well Hung Meat Company, Burts Devon Roast Beef aims to recreate the flavours of a traditional Sunday roast, and also taps into increased consumer demand for strong traceability.

The premium addition, which will be unveiled at IFE 2015 later this month, is available in both 40g and 150g pack sizes.

This follows the announcement that Burts Potato Chips has partnered with Wychwood Brewery to launch Hobgoblin Burts Spit Roast Steak Chips in a 40g packet. 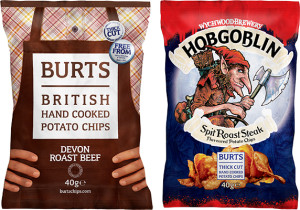 The product, which was launched in February, is supported by an integrated marketing campaign, featuring an experiential sampling campaign, on-trade sales POS, targeted on-trade advertising, PR and social media activity.

Westons Cider has signed a three-and-a-half-year contract with multi award-winning venue and event caterer Amadeus, which will see its premium British cider Stowford Press showcased to approximately two million discerning consumers in the next year alone.

Amadeus is part of the NEC Group, which includes NEC, Barclaycard Arena, The Ticket Factory and the ICC. Following the new partnership, Stowford Press will be available at the Barclaycard Arena and Genting Arena, in both 500ml PET bottles and on draught.

The arenas are renowned for hosting a wide range of big-name sports, music and comedy events, with Paul McCartney, Madonna, Michael McIntyre, Disney on Ice and The X Factor Live Tour performing in 2015.

Geoff Bradman, head of sales at Westons Cider, says: “The partnership is a great vehicle for brand awareness of Stowford Press, with events goers travelling both nationally and internationally to the Barclaycard Arena and Genting Arena.

“Stowford Press is currently growing at 12% year on year (CGA Strategy), and the partnership can only help increase this, through greater consumer recognition.”

Malibu has refreshed its pre-mixed range by introducing a packaging redesign and its first diet variant, brand owner Pernod Ricard has announced.

The existing pre-mixed cans, which are available in Malibu Caribbean Rum with Coconut and a choice of Cola, Mango or Pineapple flavours (rsp £1.99) have been given a makeover, which pays homage to Malibu’s iconic bottle. Sparkling bubbles have also been added to the cans’ livery to excite and drive trial.

Malibu has also added a Diet Cola variant to its line-up, designed to capitalise on the hottest new trend in the ready-to-drink category.

“We have enjoyed huge success with our pre-mixed range since we first launched in 2011,” explains Adam Boita, head of marketing at Pernod Ricard UK. “It’s really important that we continue to innovate and excite our audience, particularly in a category where there is such great scope for further growth.” 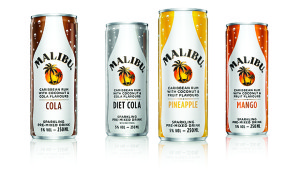 The introduction of pre-mixed cans has delivered successful growth for the Malibu brand, with the range selling more than 5.5 million cans since the launch, and it is currently growing ahead of the market, up 18.7% in value and 16.3% in volume (Nielsen).

Meanwhile, Pernod Ricard has revealed that Malibu”s fun-serving coconut cup drinking vessels, which have proven popular in grocery and the on-trade, will be available in the wholesale channel from June.