The Best-in selection, all price-marked, includes 20 fruit and vegetable items, with labels displaying the country of origin and best before dates. There is a minimum 30% profit on return on each sku.

Category controller for fresh and chilled, Steve Carter, said: “At the moment, there is a chasm of opportunity in chilled and fresh for convenience retailers.

“At one end of the spectrum we have the multiples offering aisles of loose and packaged produce and at the other we have traditional greengrocers and ethnic specialists.

“Consumers would like to buy fresh locally rather than make additional, unnecessary trips to these types of stores.

“Local stores do other areas of chilled and fresh well, so there is no reason why they cannot provide a strong core fruit and veg offering.”

Investment in BWG’s SPAR wholesale and retail business in Ireland, as well as the company’s Appleby Westward wholesale subsidiary in Saltash, Cornwall, will be made over the next five years, Cash & Carry Management can reveal.

The pledge to commit around 100 million euros to these operations was made by the directors of SPAR Group in South Africa, which has paid 55 million euros for an 80% stake in the Dublin-based group.

BWG delivers to about 1,100 symbol stores and has annual sales of 1.2 billion euros. It claims a 35% share of the Irish convenience store market. Both concerns have been established for 50 years.

BWG chairman Leo Crawford, who is chairman of SPAR International, will, together with his management team, continue to lead the Irish business. SPAR South Africa has annual sales of 3.5 billion euros.

BWG, originally part of the Brooks Watson Group, was acquired by Irish Distillers in the late 1980s.

Until 2002, it was owned by Groupe Pernod Ricard, when it was purchased in a Crawford-led management buyout supported by venture capitalist Electra Partners.

Eight years ago, it was bought by Triode Investments, a company controlled by Crawford and two partners.

Despite continued investment in technology, increased productivity and improved operating cost efficiency, Glasgow-based JW Filshill saw turnover slip by 4.2% to £158 million in the year to 3 January. Gross profit was static at £10.2 million while the pre-tax surplus was £800,000.

During the period under review, the C&C/wholesaler and owner of the KeyStore brand improved its website and EPoS systems and made other digital innovations for the benefit of customers across Scotland and the north of England. Operating costs were cut by £400,000. 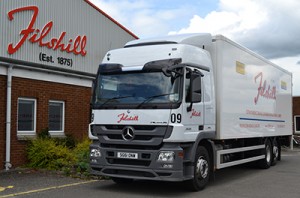 Managing director Simon Hannah described the results as satisfactory in a convenience retail sector that continues to come under pressure from major supermarket brands and discounters.

“The independent retail trade remains highly competitive and challenging, and we seek to manage the principal risk of losing customers by offering strong promotions and wide-ranging advice and support for retailers,” he said.

Hannah added that Filshill is in the process of making changes to its stocking strategy to further reduce operating costs.

He commented: “We continue to place emphasis on staff performance and measured incentives schemes and believe that the monitoring of vehicle fuel performance, sales service levels, range achievements, unanswered telesales calls and returned orders is an effective part of our business performance review.

“Our sector’s trump card is the high level of customer service that the big supermarkets struggle to provide.”