“Sales were down during the first three quarters of the financial year, mainly due to the fall in tobacco sales in line with the fall in UK consumption,” said director Naser Janjua Khan. “Sales increased significantly during the last quarter due to the impact of COVID-19.

Meanwhile, Bestway Retail, which operates the Bargain Booze, Wine Rack and Central Convenience Store brands, recorded a loss of £8.2 million in the same period – this compares to a loss of £6.2 million in 2019.

Key performance indicators highlighted by the directors include an increase in revenues from £379.4 million to £388.5 million. However, gross profit margin dropped from 13.5% to 12.8% and store numbers declined from 631 to 587.

“Within the year, the group has taken steps to stabilise the business following its acquisition by the wider Bestway group,” said Khan. “The extension in the stabilisation period has contributed to the £8.2 million loss. The directors expect the key performance indicators and loss position to improve further in the year ending 2021, where they would expect the group to return to a positive position.” 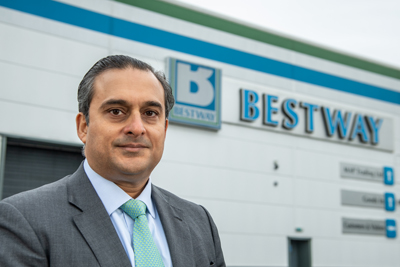 “As a sector, we also had to absorb the continued impact of the National Living Wage as well as the additional costs and associated uncertainty surrounding the pandemic and Brexit.

“Our commitment to delivering improved service and convenience to customers proved to be the right approach. The continued focus and investment in the supply chain (and the business as a whole), has helped us offer better service levels alongside a growing emphasis on our online and digital strategies, which have been a catalyst in meeting the needs and changing behaviours of both our customers and the end consumer.”

Bestway Retail is currently undertaking a full strategic review of its estate in order to gain a better understanding of how it can better serve its customers. The company has also announced a new structure for its field-based operations team in the next phase of its plans to bring together the convenience, franchise, company-owned and new business functions under one Bestway Retail team. This follows the acquisition of the Costcutter Supermarkets Group earlier this year.

Best-one and Costcutter field-based colleagues are combining to provide support to the group’s 2,544 convenience stores, and the new business & store development team (within the newly combined field team) will double in size.

The field-based team is led by head of symbol fascia Paul Adams, while the new business & store development team is headed up by Jamie Davison. A newly formed central operations team, led by Frankie Haynes, will provide further strategic and operational support to the field teams.

Commenting on the changes, Bestway Wholesale retail director Mike Hollis said: “Bringing together our teams is an important step in delivering our ambitious growth plans for both Bestway and our retailers. This also paves the way for us to deliver new initiatives for our retailers and enables us to extend to all our symbol retailers some of the existing high-calibre support we provide, such as access to our specialist store development team.”