Hertfordshire-based craft and speciality beer importer Euroboozer is hoping to rescue roughly 45,000 pints of beer from Kyiv-based craft brewer Varvar Brew in a show of support and to raise money for the people of Ukraine. 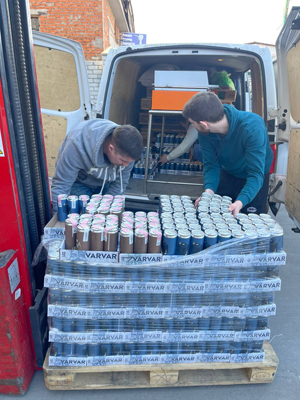 The brewery has had to close down since the invasion began and needs to sell its stock to raise much-needed funds for food and medicine, and to pay taxes and wages.

Martin Dawson of Varvar Brew said: “Our brewery has been unable to operate since the war began and we have stock in our warehouse in Kyiv that we are desperately looking to sell. Hopefully each and every beer that leaves the country can provide real enjoyment but also play a role in keeping our fight at the front of people’s minds. Our beer is made with a tank full of Ukrainian passion and the finest ingredients so we don’t want to see it destroyed.”

Martyn Railton, founder of Euroboozer, said: “It’s been horrendous watching the sickening scenes unfold since Putin’s attack began so we’re doing everything we can to help in the best way we know – by selling beer. When we reached out to our friends at Varvar, who explained the situation, rescuing the beer was the only logical thing to do.”

Over 30,000 pints-worth of Varvar Brew’s craft beers had been ordered by the UK’s bars, pubs, restaurants and retailers in just four days after the initiative was launched by Euroboozer.

Thanks to this support, the first lorry has been loaded and is hoping to arrive in the UK around 6 April.

Once back in the UK, Euroboozer plans to get the varied selection of Varvar beers stocked in pubs, bars, restaurants and retailers across the country.

In addition to paying Varvar the full price for the stock, Euroboozer will be donating all profits from the sale of the beer to www.drinkersforukraine.com, which is raising money for humanitarian relief in Ukraine.

The hope is that hospitality and retail businesses will agree to stock the beer and launch their own initiatives to raise funds.

The plan has been conceived by Railton, whose Jewish grandparents were forced to flee Austria in 1939 before settling in the UK. He is confident that the beer will be in the UK by 14 April so it can be made available to buy before Easter. The eclectic mix of beers includes lagers, ginger ales, session ales, IPAs, APAs, stouts, sours, goses and barley wines.

Railton continued: “Our plan is to encourage retailers and the on-trade to release the beer at the same time on the 14th April. We want people queuing up around the block to buy this life-saving beer so we can all raise money, awareness and a glass for the heroes of Ukraine ahead of Easter. Please, please, please dig deep, stock this beer, buy this beer, shout about this beer and help us do our bit for the Ukrainian people in the little way that we can.”