Kerry Foods has unveiled new Star Wars imagery on packs of Cheestrings to capitalise on the excitement surrounding the movie release of Star Wars: Episode VII – The Force Awakens in December. 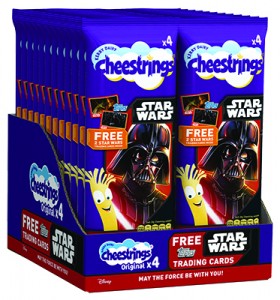 A promotion features two collectable cards inside every pack, with individual Cheestrings redesigned to look like lightsabers.

“We’ve created a fun, relevant and exciting campaign which we believe will not only give our existing consumers lots of reasons to buy Cheestrings more frequently, but will also have the power to attract new fans of the brand,” explains Tom Willcock, kids’ dairy snacks marketing manager at Kerry Foods.

The special packs, which were previously exclusive to Asda, are now rolling out across the rest of the trade.

Kerry Foods is supporting the promotion with a £1.5 million through-the-line campaign. This will be spearheaded by a TV advert, which kicks off on 23 November for four weeks.