Coca-Cola European Partners has unveiled a raft of activity to add excitement to the soft drinks category.

In a first for the energy category, the company has introduced Monster Nitro, which uses blended gas technology to give consumers a lift.

Designed to appeal to seasoned energy drink fans, the new variant features the brand’s signature energy base “supercharged with a blend of nitrous oxide and carbon dioxide gas” to deliver a light, dry carbonated texture.

Available in plain and £1.45 price-marked 500ml cans, Monster Nitro contains 32mg of caffeine per 100ml and has a citrus taste. PoS materials, emblazoned with the strapline ‘BRING THE N2OISE’, are available to support the launch.

Monster Nitro is the fourth new product from Monster this year, following the launch of Monster Mule, Monster Ultra Fiesta and Monster Juiced Monarch in January – all of which have been well received by retailers and consumers alike.

For Coca-Cola, the company is helping the trade to tap into the excitement surrounding this summer’s UEFA EURO 2020 by giving shoppers the chance to win football-themed prizes in the run-up to the tournament.

Soft drinks is the best-performing category during the football, says CCEP. Colas contributed the most to category growth during the last FIFA World Cup, and of that growth within the colas segment, more than three-quarters came from Coca-Cola (Nielsen). 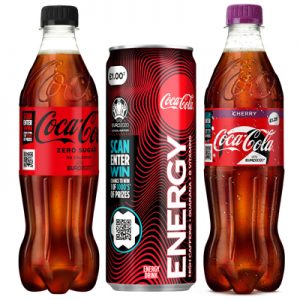 Prizes include Hisense televisions, Just Eat vouchers, PS4 access codes and Coca-Cola fan kits complete with sunglasses and scarves. The aim is to help fans recreate the matchday experience at home, while limits remain in place on stadium attendance.

The second promotion, ‘Win a Ball, Give a Ball’, starts on 1 June. Shoppers buying multipacks of cans of Coca-Cola Original Taste and Coca-Cola Zero Sugar will have the chance to win one of 5,000 limited-edition Coca-Cola UEFA EURO 2020 branded footballs.

Every time a ball is claimed, Coca-Cola will donate another ball to a local community through its longstanding partnership with football charity StreetGames.The winner can choose which region across GB they would like the ball to be donated to.

The promotions will be supported by large foyer-based activation in cash & carries, and will tie in with a new marketing campaign featuring footballing superstars, designed to drive awareness of the two on-pack promotions and sales of Coca-Cola at mealtimes – which align closely with the match schedule. Supporting digital materials will drive engagement pre, post and during the games.

For the licensed channel, CCEP also has summer activation plans for Schweppes and UEFA EURO 2020.

In addition, the company has extended its range of Schweppes Classic tonics with the launch of Schweppes Slimline Elderflower. 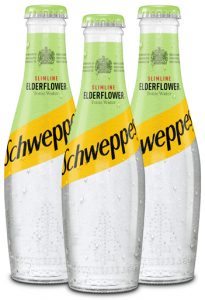 To support the launch, CCEP is providing activation kits including glasses, chalkboards and vinyls, to help venues create a unique experience for their guests and showcase the company’s suggested ‘Elderflower Fizz’ summer serve.

The introduction of Schweppes Slimline Elderflower forms part of CCEP’s 2021 multi-million-pound hospitality support programme (launched in partnership with Coca-Cola Great Britain), which builds on the £20 million package of support, including an ‘old stock for new stock’ scheme, implemented last year.

Elements for this year include free stock support for free-trade customers, promotional offers on its core range, and ‘Project Open’ – a business accelerator programme.

CCEP has grown ahead of the soft drinks category in retail, at almost 9% year on year in value, and it is now closing in on 30% value share, reported Simon Harrison, vice president commercial development.

“Growth across all of our brands has been fuelled by us maximising the shopping missions and occasions that we identified as key drivers in our ‘Taste Tomorrow’ category vision,” he said.

The key trends identified in this vision, and advice from CCEP on tapping into these trends, are:

Provide premium offerings and experiences, as well as value options.

Capitalise on snacking and the emerging return to workplaces by providing relevant treats and energy-boosting drinks.