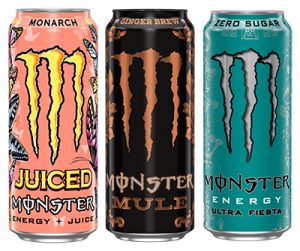 Monster Ultra Fiesta blends a mango flavour with the renowned Monster energy blend and contains no calories and no sugar.

All three new lines come in plain and price-marked 500ml cans. In addition, following 46% growth for CCEP’s energy multipacks in 2020 (Nielsen) and to help retailers cater for a variety of shopper missions and increased number of at-home consumption occasions, all three new variants will be available in four-packs later this year, and will be joined by Monster Pacific Punch, Monster Ultra Paradise and Monster Ultra Black.

The introduction of the new variants is designed to maintain momentum behind the Monster brand after a record 12 months which saw Monster add over £45 million to its retail value. Now worth £287 million, Monster has delivered more than half of the sector’s £135.4 million growth over the last two years in GB (Nielsen). A total of 72% of energy sector growth over the last year has come from new products (Nielsen).

Simon Harrison, vice president, commercial development at Coca-Cola European Partners GB, says: “We know there’s big demand in the market for new and exciting flavours, including in the low-calorie energy segment. We’re confident that our latest launches, supported by impactful marketing campaigns that the Monster brand is known for, will appeal to new and existing energy drinkers and will drive sustained growth throughout this year.”