Budweiser Brewing Group UK&I, part of AB InBev, has achieved its goal of sourcing 100% of the barley used for its UK-produced beers from British farms. 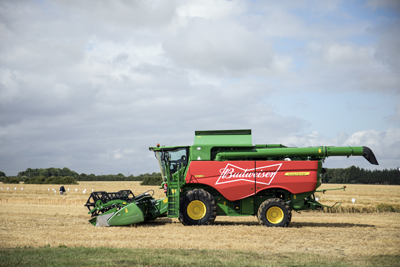 The milestone, which has been reached ahead of schedule, eliminates the need to import barley and therefore reduces carbon emissions and champions British agriculture.

Budweiser, Stella Artois and Corona are brewed at the company’s two breweries in Magor in South Wales and Samlesbury in Lancashire. More than 20 million bottles and cans of Budweiser are produced each week alone.

Prior to 2014, Budweiser Brewing Group imported 100% of the barley used for Budweiser, as the unique properties required to brew the beer were not available in UK-grown barley. Working with agronomy, grain trading and malting partners, the brewer was able to introduce a new type of grain, known as ‘Explorer’, to the UK, which met the specific standards needed to brew Budweiser’s famous recipe. There are now more than 300 farmers growing barley for Budweiser in the UK, covering more than 6,000 hectares of British farms and producing 40,000 tonnes of barley each year.

Paula Lindenberg, president of Budweiser Brewing Group UK&I, commented, “We set ourselves the ambitious goal to source 100% of our barley in Britain. Today, we’re so proud to announce that we’ve reached this goal despite the uncertainties of COVID-19. Local communities are the lifeblood of this country, so we’re absolutely committed to supporting them, creating more efficient supply chains, and brewing the UK’s most sustainable beers.”