Reporting on second-quarter results for Tesco, in which group sales grew by 2.7%, chief executive Dave Lewis said that the Booker merger has already delivered synergies of £16 million and is on track to reach at least £60 million in the full year. 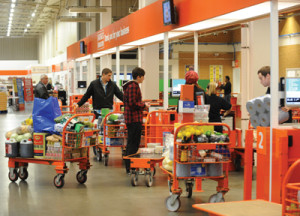 Looking further ahead, he believed that the figure could grow to a cumulative £140 million in 2019/20 and around £200 million in the following year.

He added that the retail multiple was ‘delighted’ with the C&C/wholesaler’s performance so far.

Figures for the total concern’s first quarter show that Booker’s sales rose by 14.3% and in the second three months they were up by 15.1%, making a 14.7% increase for the half year.

Referring to changes in the respective product ranges, Lewis said that the top 30 Booker products are now available in 70 Tesco branches.

“The integrated Booker offer in Gallions Reach (the east London retail park where a Tesco Extra outlet operates) is being rolled out to eight more stores.”

Joint Booker/Tesco buying terms have been negotiated with the retailer’s top 60 suppliers.

“Booker is contributing to faster growth as planned,” Lewis added.