Blakemore Wholesale has opened its third ‘premium format’ store under the Bmorelocal… fascia. 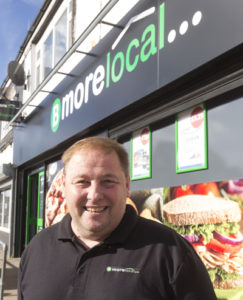 The 1,000 sq ft outlet, in Cleethorpes, Lincs – formerly trading as Apex – was unveiled following £65,000 worth of changes at the premises.

Bmorelocal… retailers have access to a full symbol group package including chilled, frozen, EPoS, food to go and drop shipments. In return, they sign up to a committed spend.

There are plans to launch a Costa coffee facility at the Cleethorpes store in the next six months.

Owner John Quinn has been a customer of Blakemore Wholesale (a member of Landmark Wholesale) for 14 years. He also owns two Lifestyle Express and Drinks Express stores in the Grimsby area but has no plans to change these to Bmorelocal…

Blakemore Foundation has pledged to award each Bmorelocal… store £200 to donate to a charity of its choice. Quinn has opted to award this money to Cancer Research UK.

Blakemore Wholesale stores director Nick Rose told Cash & Carry Management: “We are still on track to open 30 stores by the end of the financial year.”