Around 1,200 Bestway Wholesale staff and suppliers celebrated the C&C/wholesaler’s 40th anniversary in style at London’s Grosvenor House, many marking the occasion by wearing an article of ruby-coloured clothing to denote the company’s milestone.

As well as watching a video beamed around the palatial room, illustrating events in the operator’s history, they heard group chief executive Zameer Choudrey CBE run through the various stages of the company’s development, including its involvement in banking, cement and, most recently, retail pharmacy. 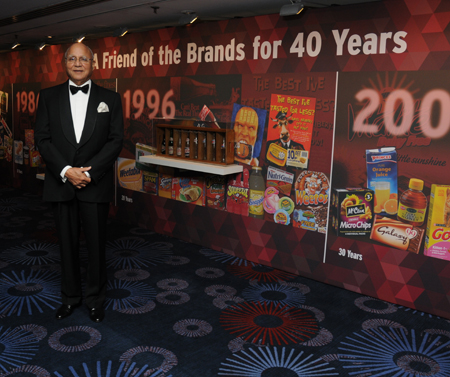 Sir Anwar Pervez OBE had the foresight to move into cash & carry in 1976.

He said: “It’s incredible to think how far we have come since 1976 under our chairman Sir Anwar Pervez OBE, who had the foresight to move into cash & carry, with ex-C&C/wholesale managing director Younus Sheikh setting the ball rolling.

“We now have (with Batleys) 64 cash & carries and are the third largest pharmacy chain with Well Pharmacy.”

Choudrey also drew ripples of laughter when he said: “All our divisions are profitable, and we also pay tax on them” – a dig at some leading UK companies who avoid duty.

“Our cash & carry customers are our driving force and we, in turn, help with their training.”

As a mark of gratitude for their loyalty, four people received awards: Bestway’s longest-serving employee, Jyotsna Patel, who has worked at the Acton branch for 39 years; Batleys’ longest-server, Huddersfield ambient section head Glenn Brewins, who has been with the company for 46 years; Azim Hasanie, of Naim Stores, Huddersfield, who has been a Batleys customer for almost 50 years; and Bestway’s record serving customer, Ratilal Mehta, who has been shopping at the Acton C&C since its opening 40 years ago.