Previously operating as Sandhar & Kang, in 2011 the cash & carry, which is located in Birmingham’s Digbeth area, was bought by the present owners, who changed the name to SK Food & Drinks. 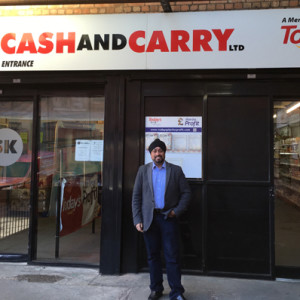 Having grown to the point where the 60,000 sq ft C&C stocks more than 5,000 lines and has a growing number of customers – including those preferring to receive deliveries – the company has now acquired larger premises in Birmingham.

Another increasingly important aspect of the cash & carry is its Today’s retail club, with a membership of more than 40, and growing.

The company is forecasting a 15% turnover increase for 2016. Around 15% of income is from delivered trade.

Asked whether Sarai has been replaced at Hyperama, managing director Marcus Singh told Cash & Carry Management: “We invested in technology last year to automate much of our replenishment process.

“Essentially, we had been ordering stock in the same way for 25 years, so the system was well overdue a complete overhaul. This went live in our fourth quarter, making the whole process a lot slicker.

“In the end, therefore, I made the decision to cut down costs in the buying team, which meant that Telly Sarai’s role was consolidated within the department. I will miss him. He left on very amicable terms.”