GroceryAid’s Sporting Lunch has raised more than £633,000 for the charity – a record amount for this annual event. 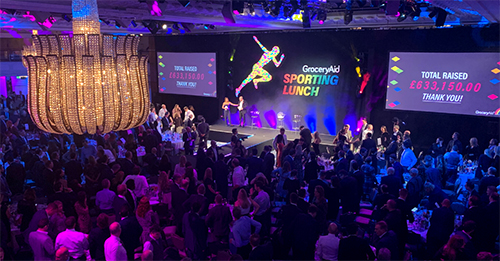 Held at Grosvenor House, London, the lunch was attended by more than 1,200 people from 198 companies.

At the lunch, GroceryAid president Charles Wilson (who shortly hands over to Allan Leighton), introduced ‘Ricky’s Story’, a film depicting the positive impact that GroceryAid support has had on an HGV driver’s life.

Commenting on the success of the lunch, GroceryAid CEO Steve Barnes said: “We are delighted to have raised such a phenomenal amount of money and grateful for the support of companies throughout the industry.

“Demand for our services is accelerating rapidly. In the last six months, we experienced a 120% increase in applications for financial support and a 52% increase in calls to our helpline, compared to the whole of last year.”